The girl at the waterpark

And then I thought, ‘Screw it. We’re here. It’s hot (108 degrees Fahrenheit, like walking in the blast of a supersize hair dryer), and I don’t have another swim suit.’

As we walked into the waterpark near Mardin in far eastern Turkey, the Kurdish heart of the country, I could sense the precise moment when Flounder realized what I had just suspected. There were boys, teenagers, young men everywhere. I glimpsed one woman supervising her toddler son as he splashed in the shallow kiddie area, but she was fully, and modestly, clothed.

I could write that I felt self-conscious as I emerged from the dressing room with just my blue plaid wrap and tie dyed bikini, but that would be disingenuous. The emotion is better identified as defiance. I defied anyone to harass me, I defied anyone to interfere with my fun. It was hot (in Mardin our newly washed laundry dried in less than 30 minutes), I had just paid 20 lira, and I was staring at no less than four water slides. We had been staying on the top story of an apartment building with no air conditioning (fair enough) and no fan either (wtf?!). I had been sweating for days and taking a shower every 20 minutes in a mostly vain attempt to not murder Flounder in a fit of heat rage. [Spoiler alert: As of January 2014, I still haven’t murdered him.]

What I’m getting at is that I was going to enjoy the hell out of this waterpark and I triple dog dared anyone to try to interfere.

As a female traveler used to wandering alone, I’ve developed something of a blind spot for staring. Flounder notices when I show my knees (my sexy, sexy knees) or elbows (equally sexy) and how many passersby gawk at me. I don’t see that anymore.

But in this waterpark, full of about 100 hormonal young men, it was impossible to ignore. I was followed with dozens of pairs of eyes. When I emerged from the water to retrieve a tube to slide back down on, a couple young male hands reached out and offered me their best inflated tubes. When I walked, gifted inner tube in hand, up the concrete stairs five or six boys followed me, chattering about me in Turkish. 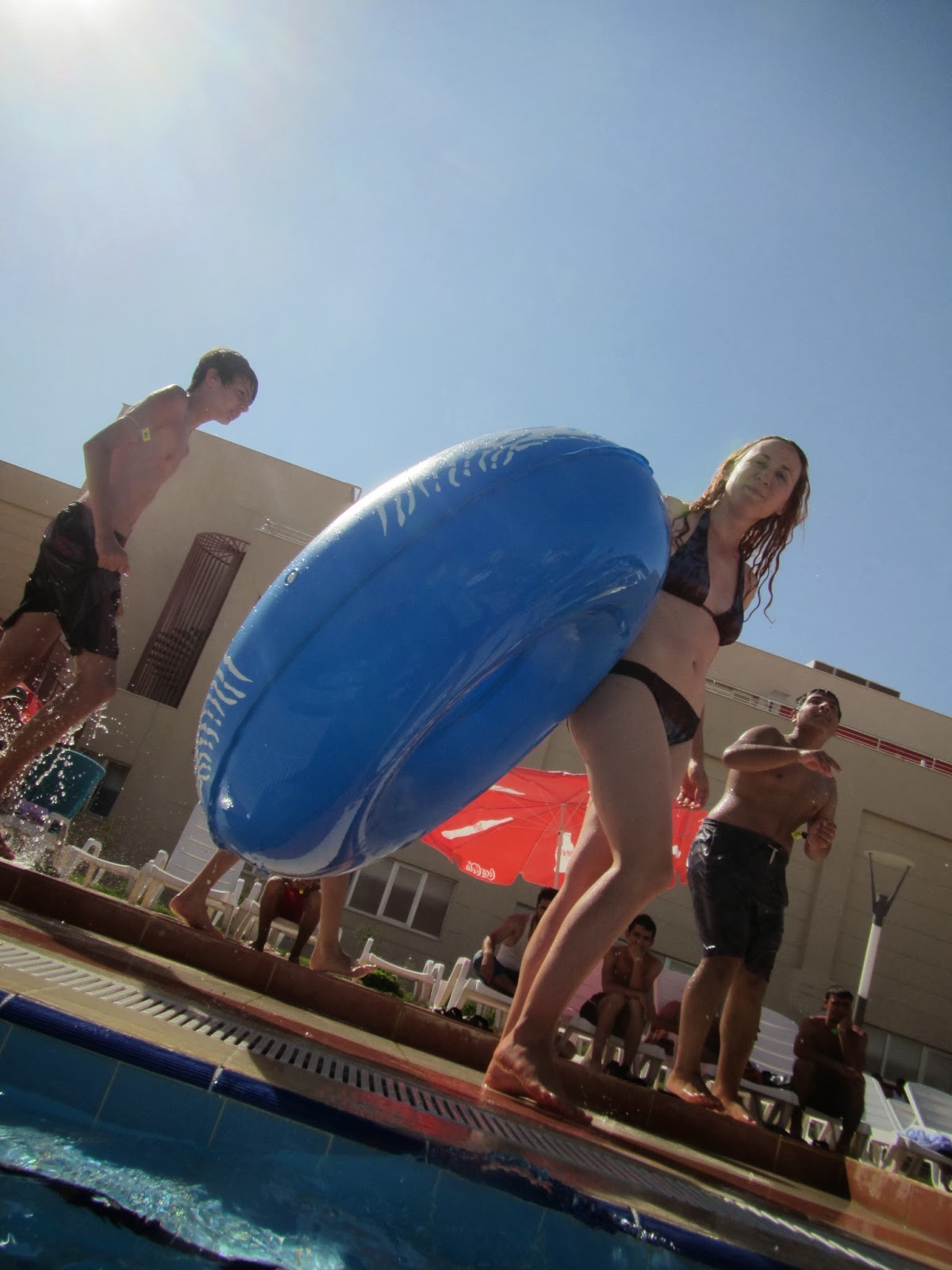 ‘Does abla speak Turkish?’ I heard them ask each other.

‘You are very beautiful!’ they murmured behind me.

I caught snippets of other, cheekier, sentences. But my entourage was overall a polite one. They kept their distance, assisted by the buffer that Flounder enforced behind me. And they kept offering me inner tubes, despite an acknowledged shortage. They were sweet and funny and respectful, as long as your version of respectful allows for lots of staring, chattering, and makes allowances for cultural differences.

It wasn’t until we moved into the shade near the waterpark’s lone swimming pool that the feared-for interference started. I lounged by the pool, writing in my journal, occasionally dipping into the pool when the heat overcame me. And when I removed my wrap and jumped into the water, men in uniformed swim trunks approached Flounder and tried to engage him in conversation. I thought they were making small talk, but he seemed convinced that they had been speaking about me and my attire. As soon as I covered again with my wrap, they said one of the few English words they knew, okay, and backed off.

‘Can you listen next time?’ Flounder asked. ‘I couldn’t understand what they were saying.’

‘If they want to talk to me, they can talk to me,’ I said, refusing to budge on the issue. 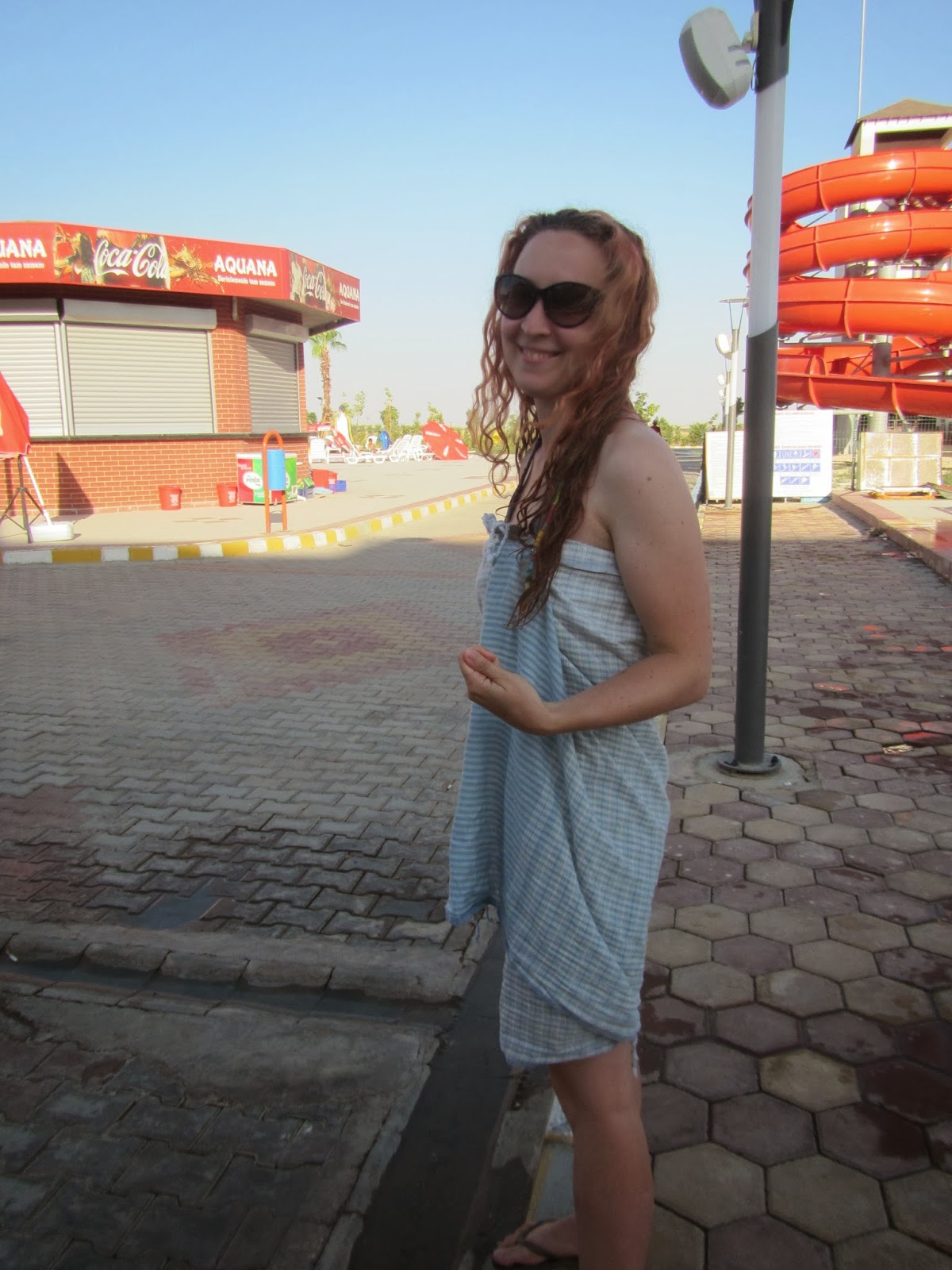 When I took off my wrap to jump in the pool, again the uniformed swim trunk men came over to Flounder. I came back in the middle of their conversation and had I wanted to listen and understand, I could have. But I didn’t. Have a problem with my behavior? Speak to me about it.

As soon as I put my wrap half on, they seemed a bit placated and indicated that everything was okay.

‘They don’t want you to go into the pool or take your wrap off,’ said Flounder.

‘They can kiss my ass,’ I said diplomatically. ‘I’m going to swim if I want to and if they don’t like what I’m wearing then they’ll have to kick me out.’

I took off my wrap and walked around the waterpark, accepting inner tubes from my entourage, splashing down water slides. And the part of me, the writer trapped inside, wanted the uniformed swim trunks to kick me out. What a story that would make! You see, to me, getting an interesting or funny story sometimes trumps having a good, but mundane, experience.