It's all downhill from here!

Zurich. Never-ending hills and what exactly can we afford?

We arrived in Zurich rested after a flight spent cuddled and interlocked. The only way to travel. Thanks to my foresight (which extends two days into the future) we had a Couchsurfing host arranged, so after some muddling in the airport (wifi? sim card? just head to the main train station regardless?) we met Corinne as she rushed out to work and left us with the city of Zurich to explore.

We bought a half liter of water. It cost $4.50 and there went our budget for the day. I kid, but Zurich is an expensive city. So we entertained ourselves in the free-est way possible: walking, walking, sleeping in parks, free museums.

We ate lunch from Coop, a grocery store chain in Switzerland. I had a feast of soy yogurt, multigrain bread roll, and fresh fruit while Flounder ate a prefab sandwich.

But we had heard of free (!) bicycle rental near the Hauptbanhof (main train station). We could leave a 20 franc deposit and an ID, take two bicycles and return them before 9:00 p.m. Good deal.

The ride was lovely. In Zurich most roads have bicycle paths, but more than that, there are numerous gravel walking/cycling paths separate from roadways, which run through parks, forests, green spaces and by rivers and lakes and hills and farms. So our ride into the suburbs took us past flowering trees and families playing in spacious green parks, past long-haired mammoth cattle with those famous Swiss cowbells around their necks. We rode through farms, along a ridge with a view downhill into the center of Zurich, and past a gun range. Yes, gun range. We were surprised too.

And on our way back, as we neared the city, we followed Flounder’s offline-accessible GPS back to Corinne’s flat.

The first turn the GPS suggested was steeply uphill. We rode our bicycles about 20 feet and then when our legs went on strike, we hopped off to push the bikes. We laughed, winded, at the top of the hill and complained to each other about the bad turn.

‘But it’s nice to get our heart rate going, isn’t it?’ I said brightly.

Where to next? We looked around and tested a few different paths before we found the one the GPS dictated. It was flat and then flat and then turned a corner and uphill. Again, we were quickly spent and had to push the bikes up most of the hill.

As the path flattened out and we reached a crossroads we had three options. Two were downhill and the third was steeply uphill as it curved deeper into the forest. Guess which path we needed to take?

We didn’t even bother trying to ride up this hill. Instead we pushed our bikes, first standing on the right side, creating more effort for the left arm, next switching to stand on the left side of the bicycles. We tried pushing with elbows extended and then with elbows flexed. Both hurt.

We reached the top and smiled at each other, though the smiles were a bit forced. We were in the middle, deep, of a forest and had seen few people.

We both laughed and he wrapped me up in a hug. I pretended to push away (fauxffended), but kissed him anyways.

I said, ‘I’m sure this is the last hill. Look, we can see the sky through the trees just up there.’

I was wrong. We cycled and turned a corner and a hill appeared, as if by magic, right in our path.

‘Sarah,’ said Flounder, ‘can you please stop saying, “This is the last hill”! You’re cursing us.’

‘Oh sure, blame it on me. It’s your stupid GPS routing us up a fucking mountain!’ I replied with more laughter than anger. ‘It’s like a twisted version of Sisyphus.’

‘That or we found the Matterhorn.’

At the top of that hill we reached another crossroads. The GPS, like a sick, sadistic piece of shit, commanded us to continue straight, up a hill that had no visible end. A jogger saw us double-checking our map for any possible detour and circled back to talk to us.

‘Are you lost?’ he asked in English.

We explained our predicament and he suggested that instead of going uphill, we take the road sloping down to the right, which would lead us to the Hauptbanhof where we could return our (once-loved, free) bicycles.

So we tucked the GPS into pocket prison (‘Think about what you’ve done!’) and followed our Samaritan’s advice.

And as we rode downhill and after glorious downhill, Flounder said something I had thought during my long bicycle trip through Vietnam and Cambodia.

‘”It’s all downhill from here” should really mean the opposite! It’s a great thing, isn’t it!’

And with the wind in my face, my limp, tired legs resting on the bike’s pedals, and a view of Zurich’s skyline peeking at us through the trees, I could only agree.

Amazing what you can get up to for free, even in an expensive city like Zurich. I was grateful for our day and the beautiful bike ride and even for the never-ending hill. I was most grateful to be traveling with Flounder, to share with him my joy, frustration, discoveries, disappointment, excitement.

And so my prediction for this adventure, our trip together: “It’s all downhill from here.”

I have a travel secret, maybe even a life secret: courage isn't an absence of fear but rather action in the face of fear.

I was nervous and Flounder was too in the days leading up to our three-month Europe/Asia trip. Many would say we had reason, as beyond the first two nights couchsurfing in Zurich we had nothing planned, but this is my preferred mode of travel and Flounder is an intrepid, enthusiastic traveler. Still, I was feeling it: washing machine stomach, pitter patter heart. I was also picking fights with Flounder above our usual amiable level of bickering.

In spite of this anxiety, we were forging ahead with our unplanned trip, our cumulus of tantalizing ideas and places.

We were each preparing for the trip in our own way. For Flounder, this meant hours of research, comparing products, testing itineraries. For me, this meant ignoring our impending departure and refusing to make plans.

Somehow between the two of us (Flounder did most of the work!) we packed our bags at 11:00 p.m. the night before our flight. Take a peek inside our bags: Flounder keeps his toiletries in a specially designed bag, one which has numerous compartments, unzips without spilling their contents, and hangs on a bathroom or shower door. I have a worn and dirty plastic bag (standard flimsy grocery type) filled with my makeup, hair bands, deodorant, toothbrush and toothpaste--all knocking around loosely. (Flounder says, "I bought her a makeup bag so at least that is in a zippered case.") Flounder has a compartmentalized medicine kit. I, again, have a plastic bag. 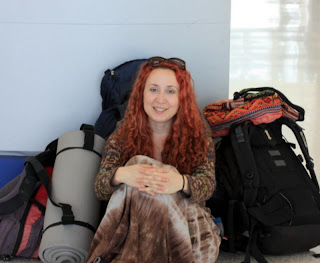 And these differences between us are the source of some of my anxiety. What if our traveling styles are too different to reconcile? What if hitchhiking, couchsurfing, and volunteering our way from Zurich to Azerbaijan puts an irrevocable strain on our relationship? Why risk it?

The answer is simple. Travel is a necessity for us both, therefore any long-term partner must also be a travel companion.

I have faith--faith nervous like a rickety, tiny dog--that we will be good travel companions, that we can take this relationship on the road. Because those difference between us? They also work to our advantage. I'll make sure we don't waste a Euro on a tram when we can walk instead and Flounder will bring the malaria medicine in case an errant mosquito finds us. I'll estimate the time it will take us to wake up, get ready, pack, and get to the train station while Flounder will pack a snack for me and remind us both to wear sunscreen.

And so, back to the secret of courage. We are facing three months on a changing, amorphous road and we are nervous, but still forging ahead. Into this adventure, this relationship, this life. 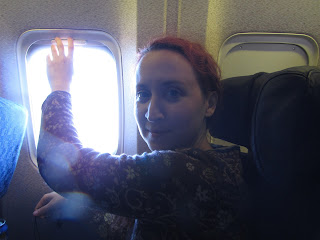 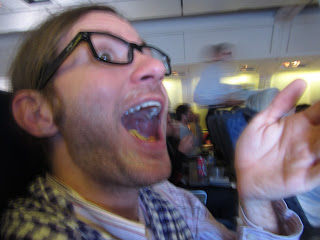 Well, we've been too busy exploring our first few cities and countries in chilly but mostly beautiful weather to really post anything to this, but as we are giving it out, we should get something up on the blog.

What? We are traveling across Europe and Western Europe.
How? We are taking many modes of transport: bus, train, boat, but mostly exploring on our feet and traveling long distances by hitchhiking.
Where? We started in Zurich, Switzerland have stopped in Munich and are now in Prague. Our eventual goal is the Caucuses (Georgia, Armenia, Azerbaijan). We are going where the wind (and winding roads) take us, but we have definite stops in Budapest,  Novi Sad, and Turkey. Most likely destinations along the way are: Montenegro, Albania, Bratislava, Italy.
Why? We want to meet the people and see the places. We are looking to make new friends and connect with old ones.
Who? Well you most likely already know us (hi parents!) or have just met us, but Sarah is a writer and a vagabond. Flounder is an artist, curator, and educator.

More soon but thanks for joining us on our journey from a distance or along our path. 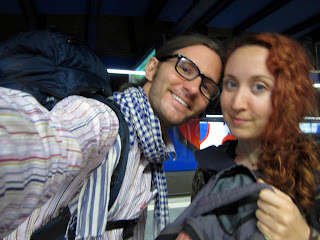