Summer is my time for residencies and travel. This summer I had one in Bangkok. Sarah was in Thailand, but 4 hours away teaching a writing course (I’ll let her write about that if she wants). I hadn’t been back to Thailand since Sarah and my first 6 months together when I visited her in Thailand. I was excited to go again.

My residency got moved at the last minute and I ended up at Tentacles Art Space, but there were several other residents so I was happy. Maybe I should explain what a residency is for those of you who are unfamiliar. It is basically time and space to just think about, research, and make artwork, free of other duties (such as teaching and service). It is an amazing gift to be able to do. I am lucky that this falls under professional development from my university as well!

I was busy finalizing grading before I left for Bangkok so I hadn’t had much time to think about the trip. But I was picked up at the airport by two interns, Christine (American) and Boyd (Thai who studied in the US). These were the first of many helpful interns and gallery staff. Pretty quickly upon arriving there were two art happenings around the city which were nice, since the other residents and several gallery people went to each.

Two residents, Ajoon and Zefan, were there for a month before we arrived, they were both Indonesian. Kate is Korean American and arrived the day after I did. Kate and I did an internal presentation to kick things off and show people what we’d be working on.

So, what was I working on? I brought my microscope to do some photo and video. I also brought my 3D scanner with the plans to make it mobile, but never did so it languished on my shelf the whole month. I collected items from an area of Bangkok that regularly floods. Basically, anything that I could find on the street that would fit in a small bag, I picked up and labeled. I also collected water from several places. Flooding is predicted to get worse in Bangkok as the climate changes and I was interested in looking at this through a scientific tool, but an artist’s mindset. 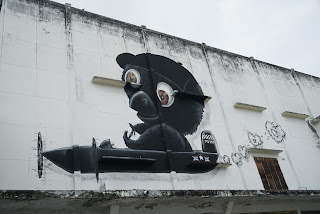 The residents and gallery staff took a fun fieldtrip to another town, Ratchaburi. We visited an amazing ceramics factory/artist space. We also toured a local museum. One of the highlights (besides good food and company) was these small local shops that had been part of an exhibition that was dispersed throughout the city. We visited a couple of interesting artists who had a great space for projects as well as running a graffiti mural project in town. It was a really interesting and fun day! 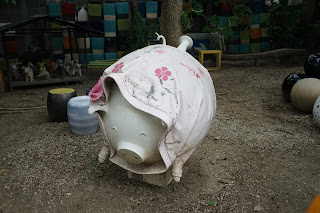 Finally, I got to visit Sarah in Chanthaburi! We stayed in a cute hotel on the river. The next day we went to where she teaches so she could show me around. I’d only ever seen it in her photos. It was great seeing here after our longest separation since we moved in together almost 5 years ago!


Work progressed at the residency, although it was quieter with a couple of staff away and the residents doing their own thing. I started putting stuff under the microscope as well as trying many output experiments.

Eventually Sarah joined me in Bangkok and we celebrated my 39th birthday! I’d met some fun video game design from France and we went to a board game café. We went to a lecture on Art and Science by TeZ, had some pampering (massages and my first pedicure), finally some drinks with the residents and staff (including a new one, Catherine from New Zealand). 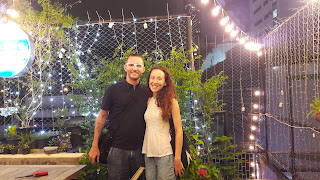 Then almost too soon, it was time to have an open studio and lecture to wrap things up. It went well. I am happy with my experiments. I don’t feel like anything was finalized, but I learned some new software, learned some new resins, and continued developing the microscopy work.

So many thanks to all the people that helped me at the residency (hoping I don’t forget anyone or massacre anyone’s name): Bow, Henry, Pon, Noll, Anna, Katie, Shanita…and, of course, my department chair--Woodman and AUD for sending me!
Posted by Flounder at 12:29 PM 1 comment: