Should we get off the bike? The struggle to appreciate overwhelming beauty in Bagan.

My mission in Bagan was simple: find a good sunset spot. In an area with nearly 3,000 temples, surely I could find one that was high enough to see over the tree line, neighbored by interesting and varied temples, and remote enough that we wouldn’t have to fight to find a perch from which to watch the sun sink and the rusty orange of the surrounding structures glow. 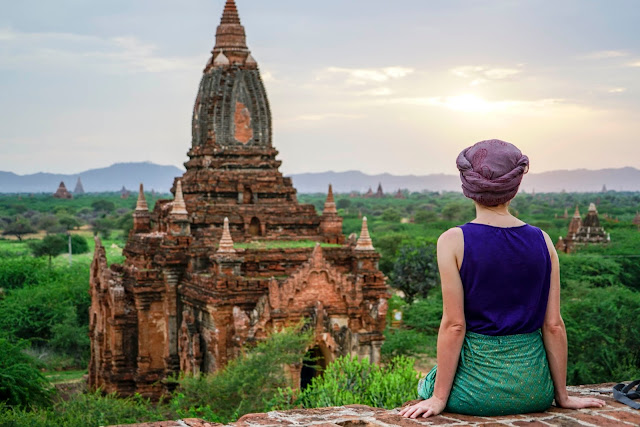 Through force of habit, I did a quick google search. The same three temples were recommended over and over. Even some new friends we met by the pool of our hotel told us they found a great sunset spot, then proceeded to recommend the one listed prominently in Lonely Planet.

But I wanted a 360 view from a quiet temple. I imagine sitting on top, just Flounder and I, meditating in peace as the light faded and the air lost its sticky heat. 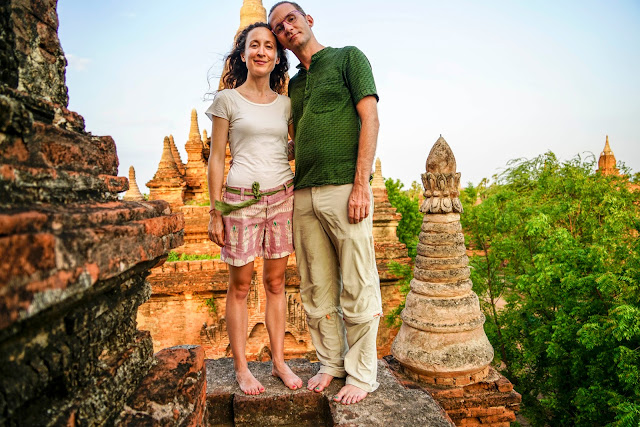 So we set out from our hotel at a reasonable time in the morning, for we are not sunrise people. “The only time I want to see the sunrise is if I’ve been up all night,” Flounder says.

Within a minute, we began to see temples of burnt orange on both sides of the road. Some were rounded at the base and pointy at the top like stupas (or, for Fairfielders, like the kalashes atop the domes), others were rectangular, or pentagonal. Some were carved and embellished, others were plain. Some were overgrown, with tree trunks and vines, and some were pristine. 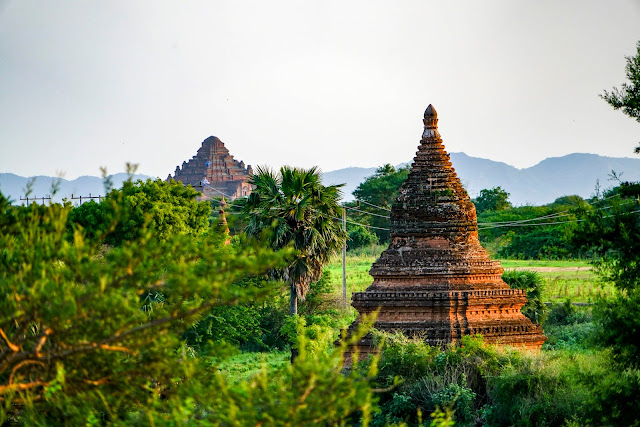 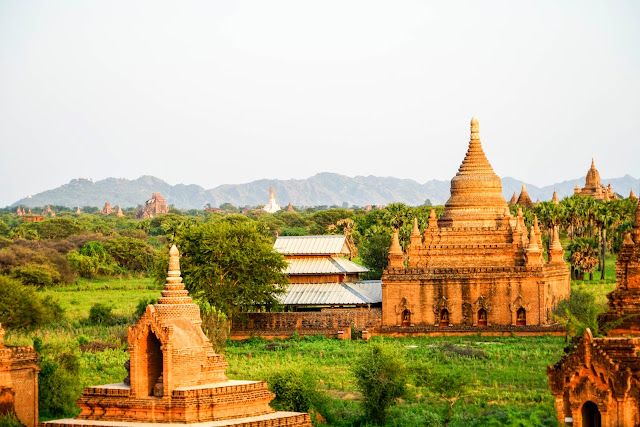 I began pestering Flounder. “Pull over! I want to see if I can climb up that temple!”

He went with me the first few times. We were full of enthusiasm and awe. “Look at those ones over there!” we’d point, stop, and explore.

When I found a temple that might fit my criteria, I’d mark it on the map. ‘Possible sunset view?’ Then move on.

But soon even I tired as we passed hundreds of perfect, unique temples. Thus is sightseeing, the tragedy of being surrounded by the most fascinating places and noticing how quickly that fascination fades.

“Another example of fine craftmanship? A bridge to ancient cultures? The finest specimen of its kind? No, let’s not get off the bike, I can take a quick picture from here.” 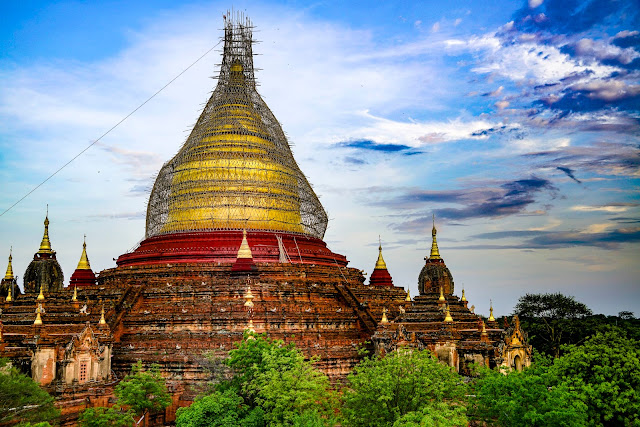 And as the heat mounted, the energy to leave our little electronic bike, to poke my head into dark spaces and search for narrow staircases up to a sunset view, that energy faded. So we got lost a little. We navigated sandy paths, we startled scrawny, lithe squirrels and upset dozing birds trying to hide in the bushes from the midday heat.

Soon we came across horses pulling tourists in wooden carts and knew we must be near the “highlight” temples. We ducked into the large, cool structures and I noticed about as many pilgrims as tourists. The area of Bagan, a stop on every tourist itinerary in Myanmar, is also a profoundly important site for the many devout Buddhists in the country. So I covered my legs and shoulders, removed my shoes, and tried not to get in the way of the worshippers praying, circling the inner shrine, or paying to apply another square or two of gold leaf to the statues of Buddha. 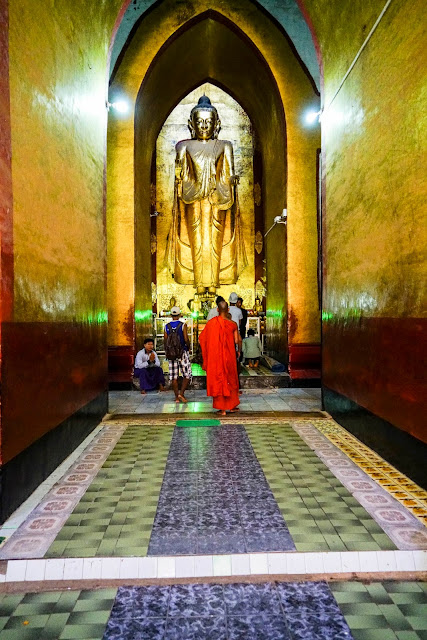 In the afternoon, in the full heat of the hottest part of the day, I found The One. It had a 360 view, was relatively isolated, and had stairs big enough that Flounder wouldn’t need to crawl to get up them. It was perfect and I knew immediately.

So we went back to the hotel pool (side note: get a hotel with a pool. During the 36 degree afternoons, there was nothing better than to dip in and out of our pool, reading a book, and chatting with other travelers.) then rode back out in the cool of the late afternoon to The One. 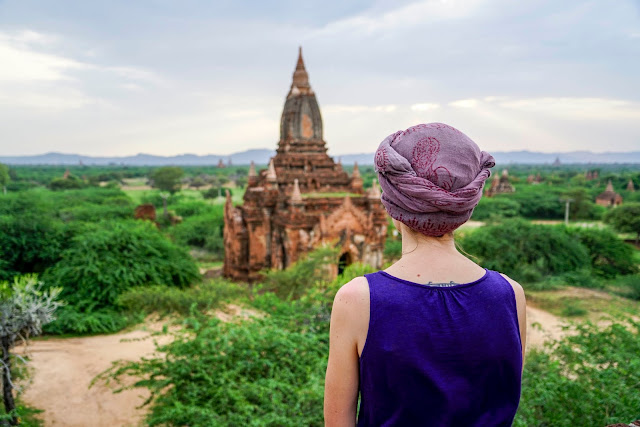 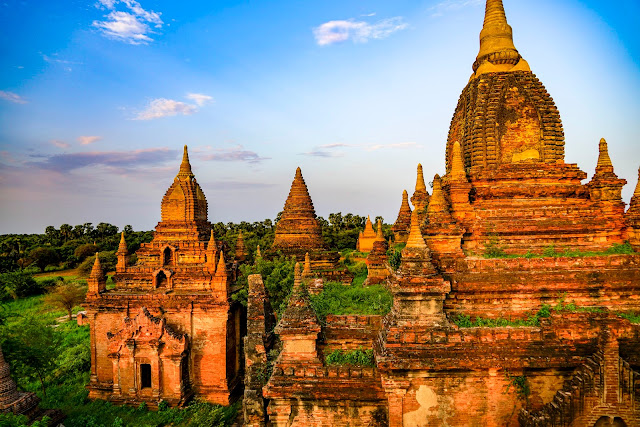 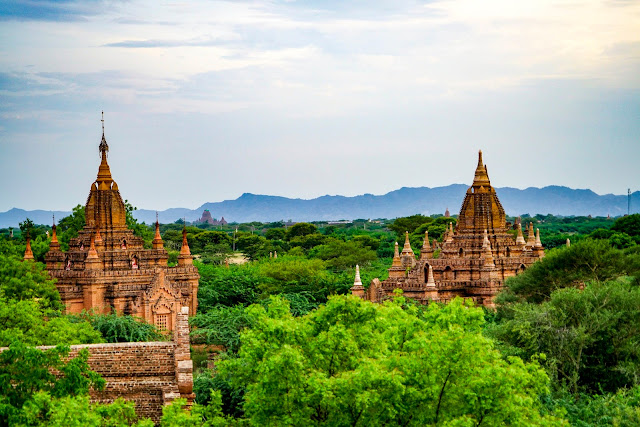 We had the temple almost to ourselves; it was just us and a man selling paintings. But after we sat down to meditate, he started to pack up and soon it was just us and a panorama view of the temples big and small surrounding us, glowing softly in the setting sun. Their golden warmth was offset by the green of trees and fields and the white of stubborn cows being pushed by small laughing boys, heading to a home between temples built nearly a thousand years ago. 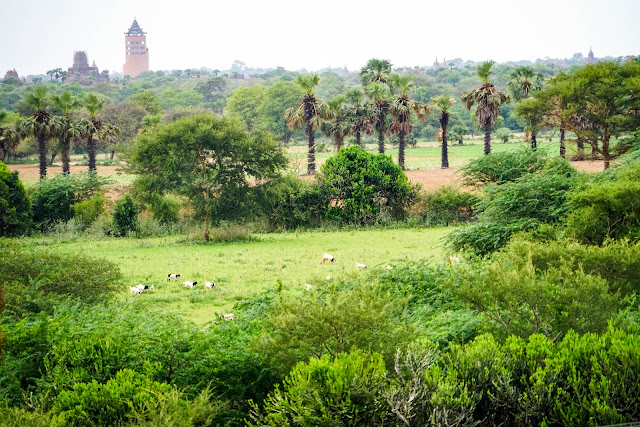 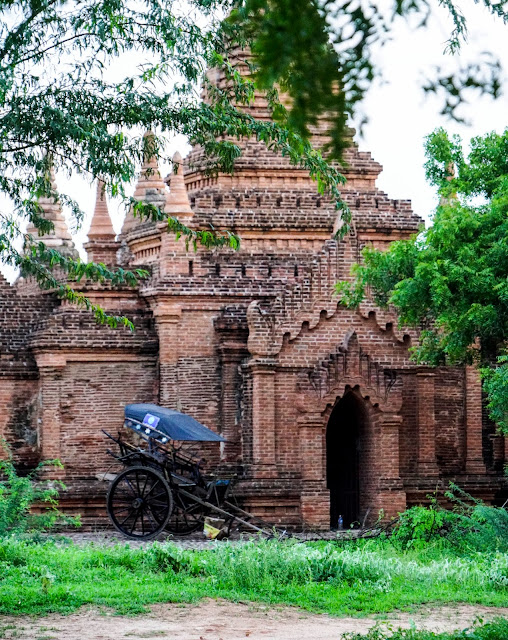 That’s the thing about sightseeing. It’s easy to become blasé about the most amazing things, to not even muster the energy to get off the bike. But then, sometimes, you find yourself with a person you love watching the sun setting over breathing history, and the beauty of it catches in your throat. 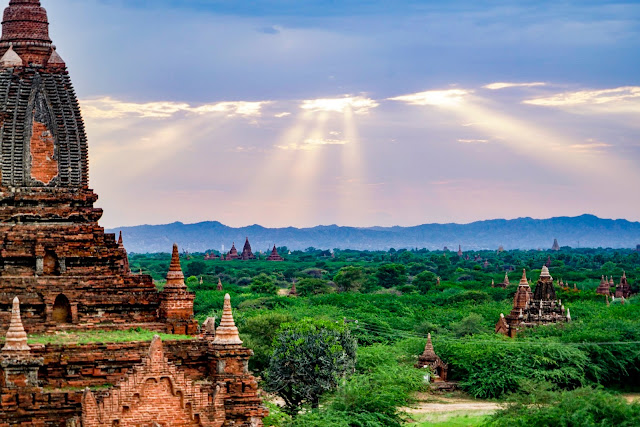 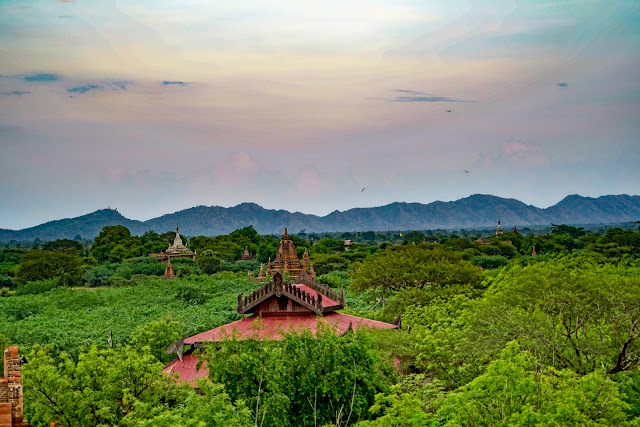 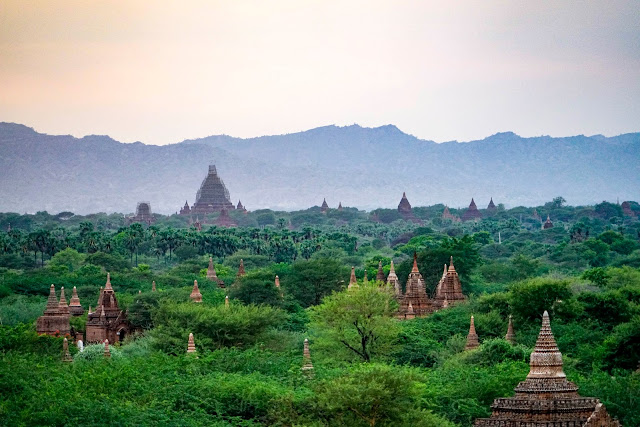 At loose ends in Mandalay

“So how do we get from the airport to the city?” I asked.

“I don’t know. I think there’s a taxi or a share taxi?” Flounder answered, nonchalantly.

We were standing in the check in line at the Bangkok airport, about 90 minutes before our flight to Mandalay, Myanmar.

How could he not know? And then because I have no filter, I asked him, “How could you not know? It’s your job to research these things!” I smiled cheekily.

“Yeah, I think I just don’t care as much. I know now that things will just work out.”

This was a shift. A shift from our early days of traveling together, when Flounder liked to plan every aspect of a trip—book every hotel, know where we were going and how to get there. But also a shift in the unassigned but assumed roles we’d fallen into in our relationship. He was the planner, the researcher. And I was the on-the-ground communicator. He did the work before the trip, I the work during.

Airports can be hectic, full of scams, and we were going to a new country.

But Mandalay’s airport was a surprise—calm, organized, plenty of agents. Our evisa was processed quickly, our customs form accepted immediately, and there was no one waiting for departing passengers, trying to usher us into their overpriced taxis. Instead, we took out money from the ATM, bought two sim cards (for a total of $3), and booked a seating in a waiting van that, for less than $4 apiece, would take us directly to our hotel.

The drive from the airport was lovely—about an hour through mango groves and green fields dotted with palm trees and pagodas.

When we arrived at our hotel, the streets dark and unlit around us, I asked Flounder, “What do you want to do tomorrow?”

Neither of us had done the research.

So we did what we love to do. We rented bikes and rode around the city. We rode to the jetty on the shore of the Ayeyarwady river and asked about boats (none in the wet season). So we ignored the early hour and sat at a riverside beer station, Flounder drinking a breakfast draught while we both watched the kids splash in the water below and the women wash laundry and hang it from the ropes tying wooden boats to the shore.

We rode on a teak bridge, struggled making left turns into relentless traffic of all speeds and sizes, saw monasteries and temples, searched for a buffet serving food from the Shan region of Myanmar, ignored the Thai imported durian and bought local instead, ducked inside when the afternoon rain started, rode along the moat and walls surrounding the royal palace, and chuckled at the antics of roly babies (so many children!), their faces covered in the soft thanaka paste so emblematic of the country.

There were many things that we didn’t do, and some things that perhaps we could have done with advance research. But we ended the day full, happy, and with a taste of Myanmar that left us excited for more.