I’d like a job with the Armenian Tourism Board, please


‘Everyone is trying to rip us off,’ Flounder told me after returning from a trip to Lake Sevan in central Armenia.

I understood why he felt that way about our brief stay so far in Armenia. We had been overcharged by two, likely three, taxi drivers; overcharged at two restaurants (one of which had attempted to charge a 20% service fee instead of the standard 10%); and we had been trailed by a rogue car-cum-taxi with tinted windows and two dudes who gave us the willies. We were staying in a hotel that had seen its prime in the Soviet era and hadn’t really bothered to update since then. When we arrived, ready for a therapeutic rest, we discovered that none of the hotel’s amenities were gratis. The swimming pool? Empty. The hot tub? Pay by the hour. The weight room? Pay by the hour. The indoor swimming pool? Possibly empty, definitely pay by the hour.
Hitchhiking saved the trip.

From our first ride (with two bank managers, one of whom had picked wildflowers for his wife and asked us to please not crush them, both of whom gave us their cards and implored us to call them if we needed any help in Armenia) to our last ride (with two teenage boys in a BMW SUV who barely spoke a word, instead blasted dance music with the windows rolled down and handed us cold drinks as they drove to the Georgian border) we experienced hospitality, curiosity, warmth, and gratitude during our two weeks in Armenia.
Yes, we regularly experienced gratitude from the people who were giving us free rides. They were thankful we were traveling in Armenia and happy to hear us genuinely gush about their country.

There’s a commonly accepted truism among hitchhikers that the nice cars rarely stop, that the people with the most to give are the least generous. Armenia turned this truism on its head. Nice, new, expensive cars regularly stopped for us. People with good jobs and disposable incomes went out of their way to help us, to invite us into their homes, and to pay for our meals. (One couple who picked us up even became a bit offended when we tried to pay for our own fruit and, later, for our own campsite.) 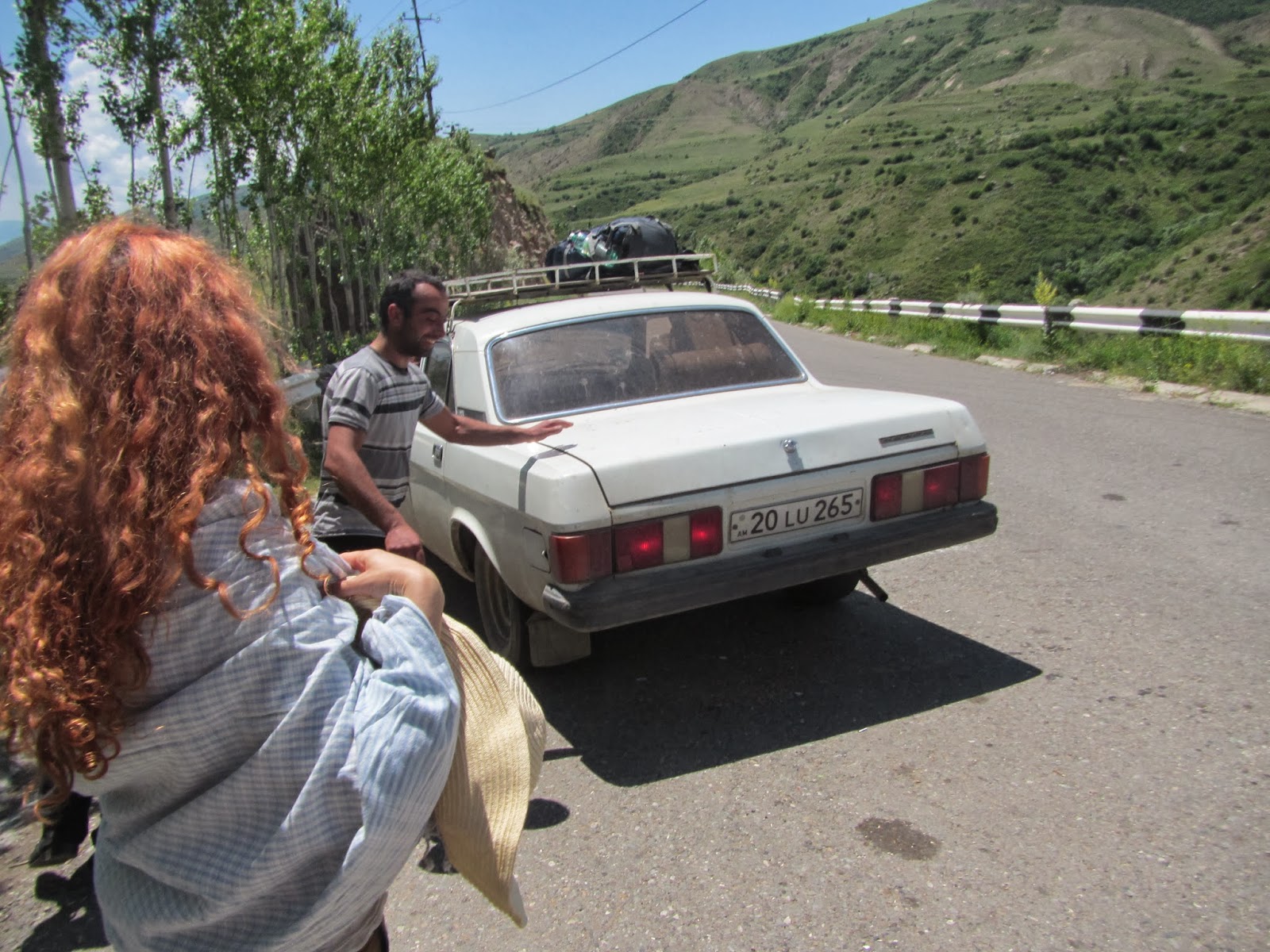 During one of our rides in Armenia, when we passed a caravanserai along the Silk Road, perched on a steep and lush green mountain pass, Flounder turned to me. ‘Why isn’t Armenia more popular with tourists? I can’t believe it isn’t better known.’

I agree. The country, besides having an abundance of warm and proud people, has a variety of landscapes, more thousand-year-old monasteries that a person can hope to visit, a distinct culture and language, along with stunning natural beauty and delicious food.
It suffers from what I am just now coining the not-in-Europe syndrome.

So although we saw lush green mountains, arid desert punctuated by the dramatically situated glowing gold-red Noravank monastery, groves of apricots (latin name: prunus armeniaca), camped on the banks of a 2,000-meter-high lake, watched beautiful women strut down the streets of Yerevan, camped at the long foot of the Biblical Mount Ararat, and gathered with peaceful Rainbow Warriors after an hour-long hike steeply into the mountains, we also saw very few tourists at any of these places.
Why is this? Simple. Armenia is not in Europe. (And in case you were wondering, neither are Georgia and Turkey, though both are as deserving of tourism as Barcelona, Venice, Paris.)
One of the constants among our many drivers in Armenia, from the retired couple in a cream leather, roomy SUV who invited us to stay with them to the three men on their way from work in a car that was barely hanging together with duct tape and wires, was this question: ‘How do you like Armenia?’

There is only one correct answer to this question and luckily it is the one, unbidden, that we wanted to give: ‘Armenia is so beautiful! We love it!’
Posted by bliss vagabond at 6:30 PM