Iceland, now including 24 hour daylight and snow in June

We expected Iceland’s summer to be colder than our Dubai winter, we did not expect it to be as cold as a proper winter elsewhere. We packed warmer than we thought we needed but was really glad the residency had warm clothes that were left by previous residents. On our third day, the high was 3C (37F), with gale force winds, rain, and SNOW. It snowed in the middle of June at sea level. We were not prepared for this.

We were expecting 24 hours of sunshine, which we got, but didn’t know how it would affect us. We basically slept whenever, woke whenever, ate whenever, worked whenever, no real regard to the time on the clock. It was interesting.

I was there to do an artist residency. There were several other artists in residence as well but most of the spaces were filled with an American film crew shooting a feature set in our little town, Olafsfjordur. I helped on the first whole read through as well as was an extra in a pub scene (hard to get into character for that one, ha).


Aside from the residency, I knew I wanted to see glaciers, whales, puffins, and sit in lots of geothermal water. I did all the above including seeing a whale breaching from a geothermal hot tub on a fjord! I also swam in the Arctic Ocean (right before a hot tub) and crossed the Arctic Circle for the first time.

Getting to the Circle (and first puffin encounter) required a 6 hour round trip ferry ride; the ride back was super rough and basically everyone on board was throwing up (still worth it!). 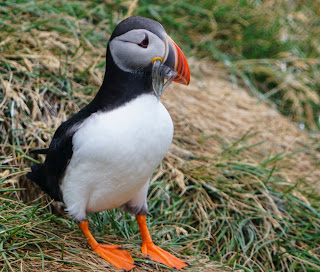 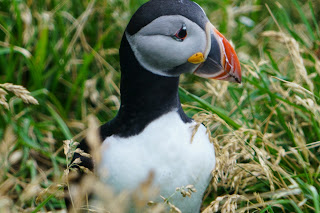 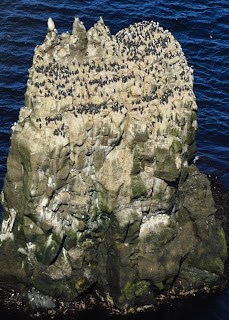 We knew Iceland was going to be expensive, but we really weren’t prepared for just how expensive. Our 2nd day quickly taught us that when a burger and fries in a fast food place in a gas station was more than 20 USD! Luckily, we had a kitchen for most of the time, so we cooked a lot.

We hiked around a bay filled with icebergs, hiked up to the very edge (and barely onto) a glacier, saw so many waterfalls we stopped even pulling over for ones that in most places would have been a major attraction.