We decided to rent a motorbike to ride around Northern Laos. Sarah had been around the region on a motorbike that she bought a few years ago, but I’d never been to Laos. We had to choose between a 150cc road bike (with somewhat knobby tires) or a 250cc dual purpose (but much more expensive). On the map, the roads looked paved so we went for the cheaper one.

We left a bag at the guest house and loaded up. I had to buy more bungee cords to feel the luggage was more secure (I’ve had several break while riding). The trip out of town was fine, the first roads were well maintained and fairly straight. We stopped for lunch where Sarah ordered me soup (like Laotian pho), by just saying one food (no menu here!)

Two-thirds of the way to our first destination, Nong Khaiw, the roads got a bit worse—smaller, with potholes, and lots of curves. This was the still better than the roads for most of the next few days. There were so many ups and downs (285m to 1600m) and hairpin turns. Overall, we travelled over 800 kilometers, our best average speed over a longer stretch was probably like 50kph (30mph). Sometimes we were averaging more like 20-25kph. I had to yell “BUMP!” often so Sarah could prepare for a giant pothole. Our last day on the best roads, we went 260ish KM to make it back to Luang Prabang.

Along the way we saw so many rivers, every river was surrounded by a village. It is also how people commute, bathe, and wash clothes. So many mountain tops, many of them also had villages. It seemed like every sort of animal we saw had babies: pigs, ducks, cows, chickens, water buffalo, dogs…humans 😊 Kids waving and yelling hello (or bye) is a common occurrence. Lots of adults did as well, which makes me feel more welcome than the kids because kids do it everywhere.

There was a lot of slash and burn agriculture—corn, bananas, rice. The valley bottom rice paddies seem more sustainable to me, but people are trying to make a living. You can feel the presence of NGOs in many towns, they are newer houses (although the mix of houses probably has as much to do with ethnicity as money), schools, water sources besides the river.

One of our more memorable stops was on the Plain of Jars. Thousands upon thousands of Neolithic stone pots over many sites. No one is totally sure of the origins, but they are probably more than 2000 years old. 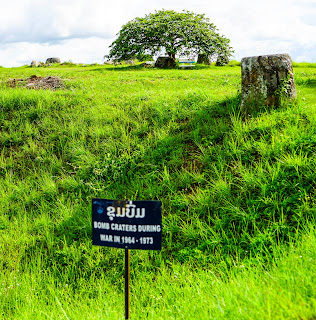 The sad thing is that this area was the most bombed area in the most heavily bombed country (per capita). The US had 9 years of bombing runs, nearly 580,000 missions, every 8 minutes, 24 hours a day. This had to be terrifying and many fled the country or lived in caves. Almost one ton of bombs were dropped for every person in Laos at the time. Many of these bombs were cluster bombs that broke up into hundreds of bombies that are still found all over the country. Many people are injured and killed every day by these, including children who mistake the small bombs for toys. Farming and construction are especially dangerous enterprises.

Luckily, organizations like MAG (link) have been working on uxo (unexploded ordinance) removal for decades, clearing many areas. Please consider a donation to them if you can.