So our plan was to see where goodwill lead us to on this trip through hitchhiking, volunteering, and couchsurfing. We actually put in some couch requests in Innsbruck Austria when we got to Zurich, but we weren’t having much luck—only one maybe. We posted a couple in Munich. Sarah had been there, I’d been to Germany many times but never Munich. When it come to Couchsurfing, my plan for finding hosts is going for people who log in often and reply a lot, also bonus points for private rooms and related interests (besides traveling, all CSers seem to share that).  Hers was going for newbies since they were usually excited by the prospect of hosting. It must work because she got a bite from a brand new host.

So after our nice time in Zurich we decided to hitch to Munich. It was chilly (much colder than we had anticipated) and rainy, but we took the train out to a gas station we’d read about on hitchwiki and broke out our laminated sign saying AUT or DEU (Austria or Gemany). It seemed like a good location, cars were going slow as they pulled out, they could see us for a while. We stayed over an hour, 4 cars stopped, they were all either going the wrong direction or only a few miles our way. 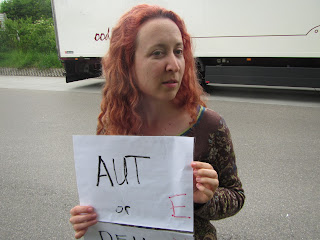 It was looking like serious rain so we decided to just take mass transit up. We headed for the airport (closer than city center) and decided to rent a car when we found a good price….to be confirmed by phone call later. That price went up about 10 times when they called to confirm. Buses didn’t run but once a day (we’d missed it), so we took hopefully our most expensive transport of the trip, a nice comfy train to Munich.

We arrived late, in the rain, hoofed it to our host Kapil’s place and collapsed. He had a beer waiting (proper Munich style) and we chatted a bit before going to bed. We had to figure out the bedding since we were his first guests (or surfers). He’d just arrived in town a couple months earlier, transplanted from Bangalore, India. He said he hadn’t been able to get any good spicy food so we promised to make some.

We just walked around the city the first day. There was a big vegan festival as well as some Hare Krishnas about. We picked up lunch at a grocery store and went to eat in the Englisher Gardens. I also had tasty beer and relaxed there. 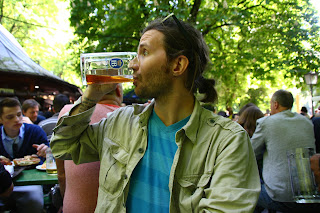 Traveling with a vegan girlfriend means we spend a bit more time (Sarah says: Flounder is being generous; it's a lot more time) looking for edibles than I would otherwise. We probably spend more time in grocery stores than museums. Granted, I always spent a lot of time in grocery stores while traveling, but now it is very common. Finding food in restaurants is easy as an omnivore, but harder as a vegan, so I try and go wherever she wants to eat if possible. I also keep a stash of emergency food because I get dumb when hungry, she gets hAngry. Almonds are a lifesaver! 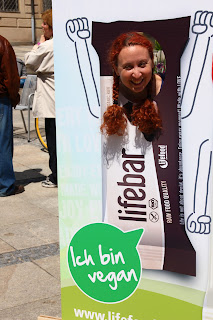 The next day we started out by going to the Alte Pinakothek to look at some art. We were headed to the contemporary art wing, but it was closed, so old masters it was! We decided to make a game of it because (despite my two art degrees) I get bored after a few minutes in a museum of only old work. We decided to count all the mythical creatures: satyrs, dragons, demons, angels, etc.  We only went through the main galleries and we’d take a side each of the room, but then point out really interesting work to each other. There were some amazing paintings like Albrecht Durer’s self-portrait, yes the one from the Wikipedia article. There were 239 fantastical creatures in this fantastic collection. 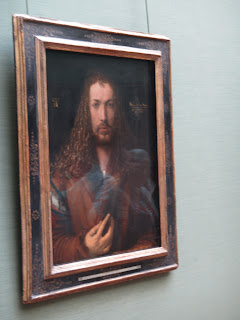 We met up with Kapil and headed in the stiff wind for a mildly stiff drink, bier of course! The old bier hall had a band and hundreds of people sharing tables. We sat with a Bavarian and his Filipino wife. He convinced us to try snuff! My great grandmother used to do it. I didn’t care for it… The beer, maibock, and the food, bock wurst, was good. One more museum (Technical museum with whole ships and planes and amazing cameras) ended our Bavarian explorations. 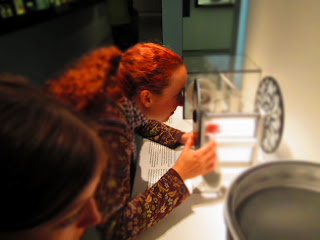 We did manage to have our first vegan doner kebab though. For those Americans who are unfamiliar, it is Europe’s version of the gyro, imported from Turkey and available EVERYWHERE. Tasty fast food (Barcelona’s is the best, imo).

All in all Munich was one of my top 3 European cities so far, it was cosmopolitan, easy to navigate, fun, has parks, museums, art. It is definitely on my return soon list. Recent immigrants like our wonderful host, Kapil, breathe new life into a city so full of history and local culture and make it a place I’d love to spend more time. (Although take note wikitravel editors, you don't have to make your city seem grander than it is, it doesn't have to be number one in Everything!)