1.       Slovakians voted to name a bridge after Chuck Norris.

2.       In Slovakia, having celiac disease (gluten intolerance) classifies you as handicapped.

3.       Slovakians would also appreciate if the rest of Europe (and the world) was aware that their country does indeed have running water, proper sewage systems, and paved roads.

The source for these tidbits, learned during our time in the country, was Katka, our Couchsurfing host in Trenčin, a small town with a lovely castle and fortress. She picked us up from the train station with a big hug and a smile on her face that never left, not for the three days we stayed with her.
Katka told us about the bridge. It was a cycling bridge under development in Bratislava and would link the city to Austria. The government, wanting public support, asked for suggestions and votes for the bridge’s name. A few ideas were floated—Maria Theresa bridge, Freedom bridge. Someone suggested Chuck Norris bridge and the idea caught on. Katka herself voted for the name (‘Why not? Do we really need another “Peace bridge”?’) as did an overwhelming majority of voters. Shockingly, the government declined to comply, but the bridge was listed as “Chuck Norris” for a few weeks on Google Maps anyway.

Katka also told us about her “handicap”. On our way to her house from the train station we stopped at a grocery store. It was a surprise when she, a lithe and energetic college student, whipped out a handicap permit, attached it to her rearview mirror, and parked in a handicap spot. She explained, laughingly, that the government gave her the permit because of her gluten intolerance, but she was quick to add that she never used the spots when they were scarce, not wanting to inconvenience anyone who actually had difficulty with mobility.

Katka also parked in a handicap spot in Trenčin’s medieval city center. We were going into the town to visit its famous castle, perched (as castles often are) atop a hill.
We could have measured our time in Trenčin in castles. We visited the town’s castle at night, where we joined Slovakian tourists in watching a slapstick play set in medieval times (all in Slovakian). Luckily, bawdy humor rarely requires translation, so we laughed along at the attempts of three bumbling soldiers to find and woo three lovely beaus. 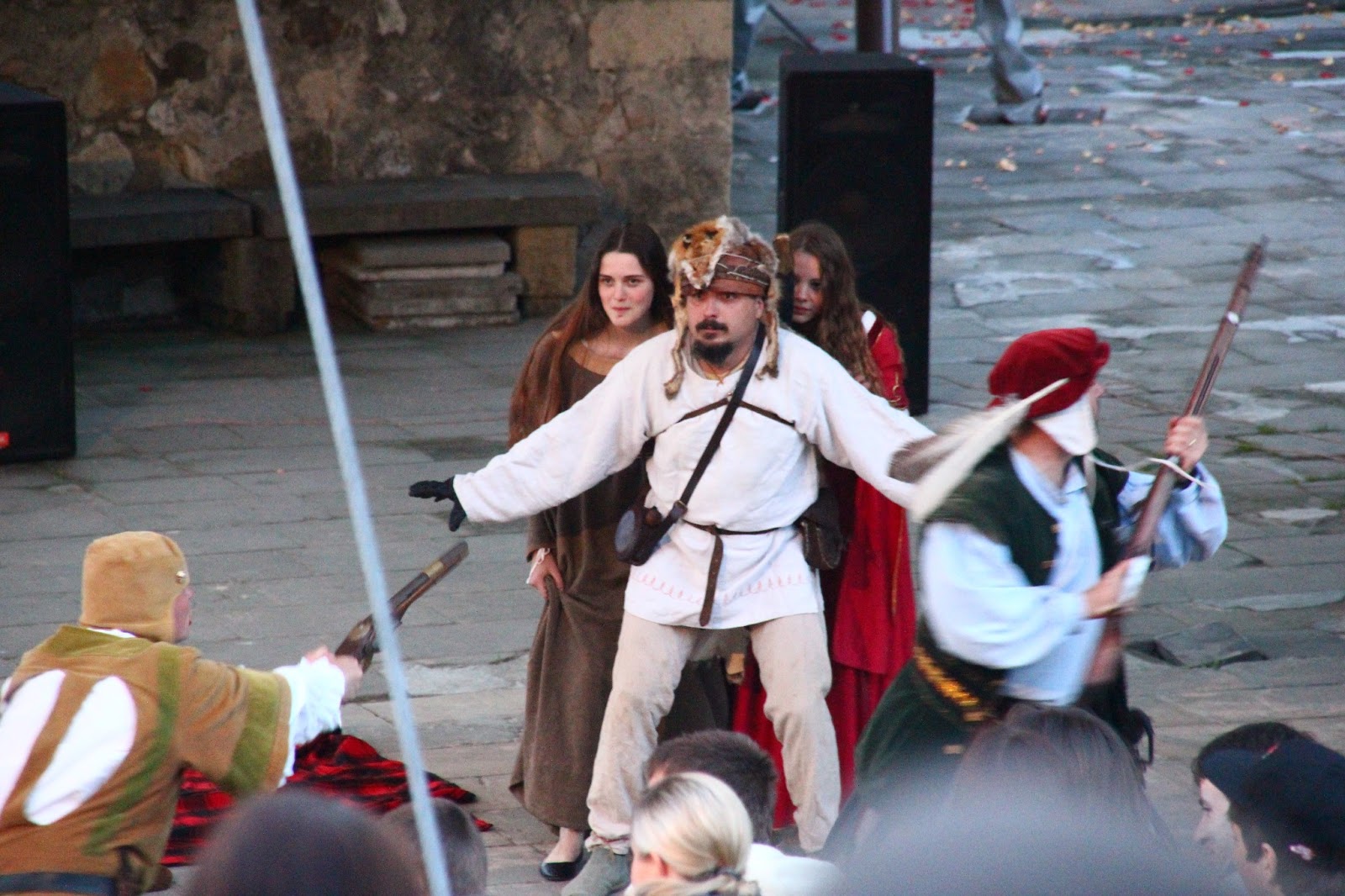 We also hiked to a ruined castle, casually perched on a hill in the countryside. As an American (where hundred-year-old buildings sometimes are protected as historical landmarks) it is hard to get used to great thousand-year-old fortresses being easily accessed—no fences, no entrance fee, no security. Katka loved to climb around the ruins and we were all three happy for a clear day and a romp in the hilly and green Slovakian countryside.
We saw the most stunning castle of all on our drive back to Trenčin. It sat perched on a cliff in the middle of a small town of narrow roads and a smattering of houses—an unexpected sight. But maybe a castle will always be an unexpected sight for me!
These three castles, Katka told us, used to communicate via smoke signals in their heyday. If one castle spotted an enemy approaching, they would build a smoldering fire to alert the next castle, about twenty kilometers away, which would in turn alert the next.

And as for Katka’s last exhortation, that people stop assuming Slovakia a backwards country, let me testify. Slovakia has flawless plumbing, good transportation, and beautiful castles that you can take out of the box and play with, so to speak. In some ways, Flounder and I found the country American-like in its wide roads and proliferation of cars and big box stores.

Slovakia was also, for us, a peaceful place, away from the cities we’d been staying in and the crowds we’d been wrestling. A place to breathe pure air, take a stroll through tiny villages with their May poles up for the entire month of May (they would have a party commemorating the erection and dismantling of the pole with drinking and eating, but no dancing—that is a German tradition), and hike through forest and hills. If we occasionally came across a castle ruin, so much the better. 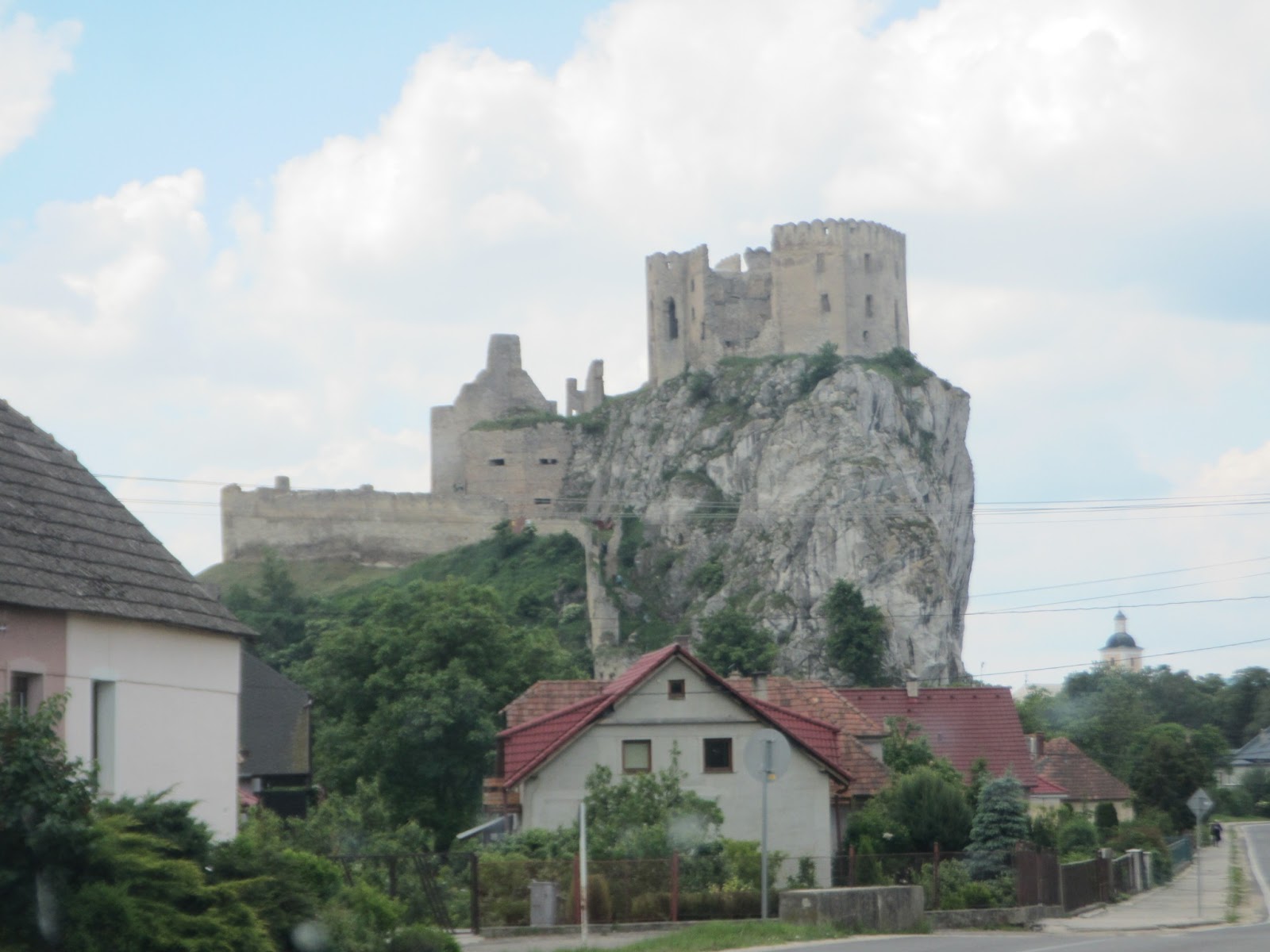 Posted by bliss vagabond at 7:29 PM